Showing posts from November, 2021
Show all

November 30, 2021
Another game, another hard-fought draw. Nepomniachtchi made the reasonable choice to essay the solid Petroff's Defence in today's game, and he was rewarded with a game where Carlsen never really had an advantage. The fourth consecutive draw - and, indeed, the seventeenth consecutive draw in World Championship match games - has led to a fair amount of adverse commentary, but I for one am finding this contest gripping. The lack of decisive results so far has simply been from both players being up to the task of neutralizing their opponent's challenges, rather than from any lack of desire to win. <iframe id="8685877" allowtransparency="true" frameborder="0" style="width:100%;border:none;" src="//www.chess.com/emboard?id=8685877"></iframe><script>window.addEventListener("message",e=>{e['data']&&"8685877"===e['data']['id']&&document.getElementById(`
Post a Comment
Read more

November 29, 2021
With Nepomniachtchi having achieved little from his Anti-Marshall line in Game 1 , it seemed likely that he would make a small change for Game 3. And so it proved, with his choosing 8.a4 rather than 8.h3, and the game moving into slower lines featuring the knight manoeuvring for which the closed Lopez is noted. And, it seems, the experiment was reasonably successful - he appeared to get a slight edge from the opening, and had he made a different choice at move 21, he may have retained it, although the resulting position was still quite tricky to exploit. As it was, the line he actually chose allowed Carlsen to simplify into a level ending, and the match remains tightly poised at 1½-1½ heading into the first rest day.
Post a Comment
Read more

November 28, 2021
Game 2 of the match, and Nepomniachtchi, not wanting to take undue risks at this stage, elected not to play his favoured Grünfeld Defence. Instead, he went for the rather more sedate 1.d4 Nf6 2.c4 e6 3.Nf3 d5, and the game quickly reached an Open Catalan. Despite this opening's reputation, this was another interesting game which followed the pattern of the first in some respects: Carlsen sacrificed material (first a pawn, then the exchange) for long-term positional compensation, which Nepomniachtchi had to defend carefully to bring home the half-point.
Post a Comment
Read more

November 27, 2021
With the qualification for the 2022 World Championship match in full swing, it might have been easy to overlook that the match scheduled for 2020 hadn't actually yet been played. But now it has finally started, as Ian Nepomniachtchi becomes the fourth person to try to defeat Magnus Carlsen in a world championship match. While the 73-point rating gap in Carlsen's favour suggests that he is the strong favourite - 538 's calculations give him something like a 5/6 chance of winning the match outright - Nepomniachtchi is a much improved player over the past few years, and can take heart from the fact that he is one of the few active players with a plus score against Carlsen. The first game was a rather cautious affair, although quite interesting for those of us who like subtle endgame battles. Carlsen sacrificed a pawn early on for nagging endgame pressure, and a lesser player than Nepomniachtchi could easily have crumbled; instead, he managed to hold on for a draw. If the re
Post a Comment
Read more 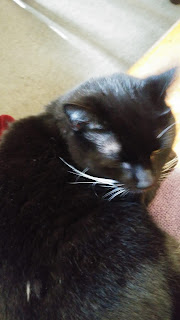 It has been an eventful week. My sister's moving abroad, and I have now taken custody of her cat and rabbits. This being the internet, I am now constitutionally obliged to post a picture of the cat in question, so here he is: Myszu     I also played some games at the local chess club; it was a night in which I managed to get in one standardplay and four rapidplay games, and won them all, taking me to 4/4 in the club championship (total scheduled games: 11) and 11/11 in the rapidplay (total scheduled games: 20). Three of these games were against Jon Munsey, who was already a member of the club when I joined back in 2002; the other two were against Jevon Whitby, who has just joined this season, and seems to be a decent player.
Post a Comment
Read more 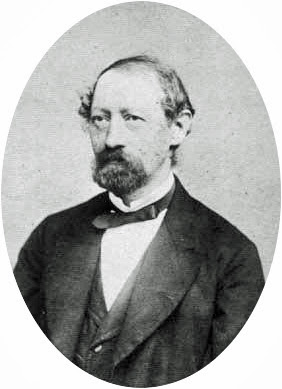 Tassilo von Heydebrand und der Lasa There are two competing claims to the title of Staunton 's successor as the best player in the world, and their levels of fame are surprisingly different. The general chess public's knowledge of Adolf Anderssen deservedly ranks him very highly; he won the first international tournament, and two of his games always make the collections of classics. This article's subject, though,  Tassilo von Heydebrand und der Lasa (1818-1899) is a somewhat more obscure figure. Like so many of the great players of the 19th century, his ability to play in tournaments was curtailed by the needs of his career - in this case, in the Prussian diplomatic service - but his results in match play between 1843 and 1853 - which included two match victories over Anderssen and one over Staunton - show that he was capable of holding his own against the best players of his era. His playing style was very much of its time - a ferocious attacker with a keen tactical eye
Post a Comment
Read more

There are some openings I really shouldn't play

November 15, 2021
I have just come back from a week visiting my sister in Exeter, which was a nice refreshing break. And thus I did not play any games at the chess club last week. However, I played plenty the previous week - one standardplay and three rapidplay - and those are the subject of this piece. The three rapidplay games I won without much incident, as I rather savagely dispatched my opponents' somewhat dubious opening ideas. However, the standardplay game that started the evening off was another matter. This game featured the Symmetrical English, 1.c4 c5. There is much that suits me about this opening; it leads to double-edged games where there can be play on all sides of the board. However, what it also leads to, and this is where it continues to trip me up, is surprisingly trappy and tactical positions very early on. And this is what happened this time; I played an otherwise positionally-indicated move that should have lost a piece, and had my opponent spotted it, I'd have been in f
Post a Comment
Read more

November 08, 2021
A hard-fought final round eventually produced nothing much in the way of changes in the finishing order, as the top thirteen boards were all drawn. This meant that Alireza Firouzja finished the tournament as outright winner , and qualified for the Candidates. Joining him in the Candidates is 2018 challenger Fabiano Caruana, who finished ahead of Grigoriy Oparin on tie-break. Oparin will have to be satisfied with a place in the Grand Prix, where he will be joined by five of the thirteen players who finished equal fourth: Yangyi Yu of China, Vincent Keymer of Germany, Maxime Vachier-Lagrave of France, Alexandr Predke of Russia and Alexei Shirov of Spain.
Post a Comment
Read more

November 07, 2021
Firouzja ended Howell's winning run with a convincing victory, despite Howell's finding some excellent defensive resources in time trouble. This brought him back into the sole lead, as Caruana had to scramble for a draw against Vachier-Lagrave. The only player in the chasing pack to win was Oparin, who is now tied for second with Caruana; he faces Firouzja in the final round. This game is now destined to produce one of the Candidates qualifiers. The other Candidates place will definitely go to Caruana if he beats Predke; if not, it will go to somebody on 7½/11. With ten other players on 6½/10, there's all to play for on the final day. (All these players know that no more than eight players can get to 7½, so that score will, at the very least, assure anyone who gets it a Grand Prix place.)
Post a Comment
Read more

November 06, 2021
Two rounds to go, and the tournament has suddenly sprung to life again. Fabiano Caruana really needed to beat Firouzja to keep his chances of winning the tournament alive, and he rose to the occasion. The two of them now share the lead on 6½/9 with David Howell, who got his fourth win in a row by beating Korobov. Ten players are right behind them on 6, including Vachier-Lagrave and Vitiugov, as well as Sasikiran, who came back from yesterday's disappointment to win against Eljanov. My comment two rounds ago about disappointing performances by some of the big names has struck the Commentator's Curse, as all three of Aronian, Svidler and Gelfand managed wins in round 9. Of these, it was Gelfand's game that struck the eye, as both sides promoted while still in the opening.
Post a Comment
Read more

November 05, 2021
A half-point lead has become a full-point lead. Firouzja's convincing round 8 win against Sasikiran took him to 6½ points, while Vachier-Lagrave and Shirov could only draw on board 2 to take them into joint second on 5½. They were joined in that scoregroup by eight people who had had 4½/7 and won. Wins for Caruana, Vitiugov, Korobov and Predke were no surprises, but the other four - Howell, Oparin, Anton Guijarro and Sevian - all defeated higher-rated opposition. It now seems very likely - although not certain - that the two qualifiers will be Firouzja and one of those ten players (Vachier-Lagrave, who has already played Firouzja, probably looking best placed of the ten), with most if not all of the six Grand Prix qualifiers also coming from those ten. The top board pairing for round 9 is Caruana - Firouzja, and it promises to be an exciting occasion.
Post a Comment
Read more

November 04, 2021
The big news of round 7 was on the top board. After reaching a drawn ending against Firouzja, Najer picked the wrong option, giving up his passed pawn when he didn't need to, and this turned the draw into a loss. As none of the other games on the top ten boards were decisive, this means that the Frenchman has retained the sole lead that he had at the end of round 4, and has 5½ out of 7. Right behind him on 5 are Vachier-Lagrave, Shirov and Sasikiran, with no fewer than 28 players in the chasing pack on 4½. Among those are five of the initial top ten seeds: Caruana, Vitiugov, Harikrishna, Dubov and Fedoseev. Also in that chasing pack is Andrei Volokitin, whose win over second seed Levon Aronian has surely ended the latter's chances. He is one of a number of big names who has done surprisingly poorly, along with Peter Svidler and Boris Gelfand, both former top-half finishers in the Candidates, but who are both in the bottom half without having yet won a game.
Post a Comment
Read more

November 02, 2021
Two hard-fought draws at the top in Shirov-Firouzja and Najer-Caruana meant that the three joint leaders after round 5 are still joint leaders after round 6. They are joined by Maxime Vachier-Lagrave, who beat Ponkratov, and Krishnan Sasikiran, who beat Predke, making it a five-way tie  on 4½ going into the rest day. There are fifteen players just behind them on 4, including three of the top ten seeds: Caruana, Esipenko and Dubov. With such a large chasing pack, it's unlikely - although by no means impossible - that someone in a lower scoregroup will shoot up in the second half and take one of the top two places.
Post a Comment
Read more

November 01, 2021
The all-French top board clash between Firouzja and Vachier-Lagrave ended in a draw, which meant that the players on 3 out of 4 had a chance to join Firouzja in the lead, and two of them did. Alexei Shirov's win against Saric and Evgeniy Najer's win against Hovhannisyan mean that there is now a 3-way tie heading into round 6, with Shirov-Firouzja an eagerly awaited match-up. Behind them, there are 14 players on 3½, including top seed Fabiano Caruana, who beat David Howell. More surprisingly, that scoregroup also contains 89th seed Manuel Petrosyan, whose draw with Sarin meant he is still unbeaten despite having faced five higher-rated opponents. He's still a long shot to qualify from here, but you can't rule it out at this stage. His next game, however, will be the toughest test yet: a downfloat to 5th seed Vitiugov with black.
Post a Comment
Read more
More posts