Showing posts from September, 2021
Show all

In which I return to over-the-board chess 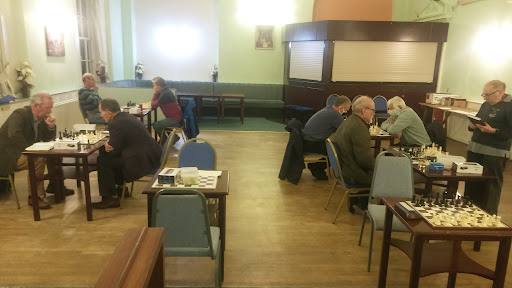 Barnstaple Chess Club. Left foreground: Gilbert Csécs v Richard Smith. Left background: Rob Oughton v Rick Dooley. Right foreground: John Howard v Jon Munsey. Right background: Mike Dow v Graham Jones  It's been a long time coming; I last played competitive over-the-board chess in March 2020, in rounds 5 and 6 of what would end up being an aborted 4NCL season. But tonight, armed with mask, I ventured to Barnstaple to play my first club championship game of the new season. My game was against Mike Harrison, who had joined only recently, and who I had not previously come across. That's always a potential banana skin, even more so when he chose the dangerous Budapest Gambit (1.d4 Nf6 2.c4 e5). This is, by the way, an excellent tactic for playing against significantly stronger players: picking an aggressive opening that you know well, in the hope that they will go wrong seriously enough for you to get an advantage you can convert. (The late Simon Webb's Chess for Tigers is hi
Post a Comment
Read more

September 28, 2021
The Isle of Man was originally scheduled to be the venue for this year's FIDE Grand Swiss , as it had been two years ago , but COVID-19 travel restrictions meant that the event ended up being rearranged, and it will now be played in Riga, Latvia. However, this does not mean that the island would be completely without high-level chess this autumn, as IM Dietmar Kolbus managed to put together a ten-player all-play-all with an impressive average rating of 2531. This field meant that, for the five players in the field who were not already GMs, the norm target was a relatively low total - 5 out of 9 for Kolbus himself, and 5½ out of 9 for the other four IMs. This opportunity was seized on by the young Romanian IM David Gavrilescu, who got off to a good start by beating Kolbus, and then remained unbeaten for the rest of the event; his two wins and seven draws were enough for both the norm and a share of third place, with his gain of 17 rating points getting him tantalisingly close to th
Post a Comment
Read more

September 19, 2021
It's unusual to see chess get media coverage outside the specialist chess press, but it's certainly managed it this week. The chess-based series Queen's Gambit has got Netflix into a lawsuit , thanks to a passing reference in the script, claiming that Nona Gaprindashvili (1941-), the subject of today's piece, had only played against other women. Whatever the merits of the lawsuit as a lawsuit (which I am not remotely qualified to comment on, but Twitter user questauthority is, and thinks she has a decent case ), this was clearly an unforced error by Netflix: their script made a claim not present in the original novel, and one which was easily checkable - by 1968, when the scene in question is set, Gaprindashvili had faced a number of notable male opponents , including former world champion Mikhail Tal, and others such as Keres, Geller and Gligoric. Moving on from the lawsuit, what can we say about Gaprindashvili's chess career? Well, it is impressive in a number
Post a Comment
Read more

September 16, 2021
One of the minor benefits of being part of a global internet community is the ability to haphazardly learn about faraway communities, and one of the things I recently learnt is that 16th September is an important date for Mexicans, commemorating as it does the start of the Mexican War of Independence . So, to celebrate that, I thought I would do a piece on one of Mexico's first ever grandmaster.  Mexico's place in chess history is quite small, and so far eclipsed greatly by that of its northern neighbour, but one man, Carlos Torre Repetto (1904-1978) made a big name for himself during his brief chess career. Although he wasn't active for very long (all the games I have of his are from the years 1920-1928), he managed to defeat some very strong players, most notably former world champion Lasker and future championship candidate Reshevsky. Chessmetrics lists him as world #8 for much of 1926, after some excellent tournament results in that and the previous year. Sadly, howe
Post a Comment
Read more

September 14, 2021
After the success of their previous event two months ago, the 4NCL ran another weekend congress in the same venue this weekend just gone, and this one did even better: a total of 170 people entered across three sections. With more than 50 people in each section, there was a danger that there would be multiple winners on 100% in a section, but this was averted; in fact, none of the sections had a winner get to 5 out of 5. The Open section was won by two players who'd done well at the Northumbria Masters last month, Brandon Clarke and Roland Bezuidenhuit, with 4½/5. There was a six-way tie for third place on 4. The Major section also had shared winners, being won by Oscar Idle and Joe Varley, who both scored 4½, with a three-way tie for third place on 4. The Minor section, however, had an outright winner: Evan Lewis, after taking a bye in round 1, won all four of his remaining games to win the tournament. Brendan O'Gorman, one of the competitors in the Major and one of the co
Post a Comment
Read more 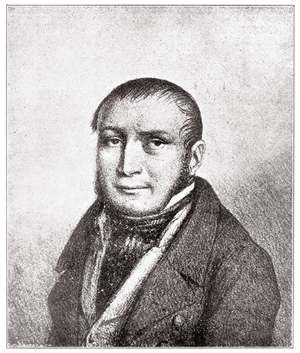 de La Bourdonnais After covering Alexander McDonnell in my previous post, it seemed only fitting to follow up with a post on his great rival, Louis-Charles Mahé de La Bourdonnais (1795-1840). La Bourdonnais was born on the island of Réunion (where his grandfather had been governor), giving him the rare distinction among top players of having been born south of the equator. He learned the game suprisingly late by modern standards, at the age of 19, but was evidently a fast learner: within seven years he would be considered the best player in the world, after becoming able to defeat his coach, Alexandre Deschapelles . The best known, and best preserved, of his games are those of the matches with McDonnell in 1834; his winning the first, third, fourth and fifth matches, with an overall record of 45 wins, 13 draws and 27 losses, bolstered his claim to being the world's best player, and he would remain considered so until his death in 1840. In many ways, La Bourdonnais was a great c
Post a Comment
Read more

September 07, 2021
One of the distinguishing features of the early days of competitive chess was that there was very little money in the game. (There arguably still is, but nowadays there is enough that the elite players can make a living from playing alone.) This led to a situation where most of the top players had to make their living by other means, sometimes making great contributions to the world. Well, this is not such a case. Alexander McDonnell (1798-1835) was one of the key figures in the development of the game; his six matches with de LaBourdonnais in 1834 could be considered the model for today's world championship matches, and perhaps more importantly, they set a precedent that important matches of that nature should have their games recorded for posterity. Although he was overall the loser of the series of matches, his winning the second match 5-4 means you could arguably call him a proto-World Champion before there was an official title. (He was also leading the sixth match 5-4 when
Post a Comment
Read more

September 02, 2021
It's been a busy month for title-norm tournaments in England, and after the events in the South-East and the Midlands , it was now the opportunity of the North to see what it could do, and this arrived in the shape of the Northumbria Masters in Newcastle, organized by Tim Wall. Unlike the previous two events, which were small tournaments with just ten players in total, this was a full chess festival; not only did it have two title-norm all-play-alls, it also had four other nine-round Swiss sections, in which a total of 191 players played. Both the all-play-alls yielded title norms. The winners of the GM norm section are names that readers of this blog should find familiar: Conor Murphy and Ravi Haria, winners of Muswell Hill and Wood Green respectively. They both picked up GM norms; Ravi's is his third and final norm, and he just needs to get his rating up to 2500 to get the title. The other norm-seeker to get one in the section was Callum Kilpatrick, who got his final IM no
Post a Comment
Read more
More posts